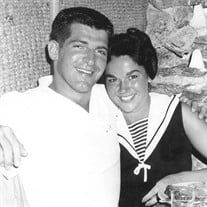 Michael William McGuire November 16, 1937-November 14, 2016 Michael William McGuire passed away at his home in South Lake Tahoe with his loving wife of 55 years, Carolyn, “Revonne”, by his side. He was predeceased by his parents Ralph and Emma McGuire, and his sister, Marlene McGuire. Michael attended Franklin Elementary, Lincoln Middle School and Santa Monica High School where he was a member of the CIF football champions in 1954 and 1955. He played center at The University of Utah. After graduation, he became an executive at Stop-n-Go and division manager at 7-11 as well as becoming involved at his family owned business, Fireside Market and The Farms Market on Montana Avenue in Santa Monica, California. Michael is survived by his loving wife Carolyn; children Traci, Mickey, Shelli, Shannon, and Sean; grandchildren Matthew, Mitchell, Jessica, Marissa, James, Katie, Kasie, Romy, Bianca, Lillie, Luken; and great-grandchildren Taylor, Savannah and Milana. Michael is also survived by his sister, Mareva Cramer. He loved football, flying his plane and most of all, his family and dear friends. The family plans a memorial service to celebrate Michael’s life at a later date. Donations made in Michael’s honor to the Parkinson’s Fund (www.parkinson.org), Santa Monica High School Vikings Club (www.samohi.smmusd.org/Athletics/vikingfund.html), or your choice of charity.

The family of Mr. Michael William McGuire created this Life Tributes page to make it easy to share your memories.

A comforting word from you means a lot.

Send flowers to the McGuire family.