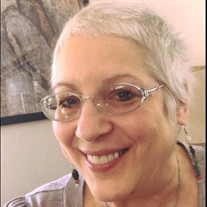 Diana (Bahn) Freeman Diana Freeman, 59, of South Lake Tahoe, CA. went to be with the Lord on August 25th 2017, surrounded by her family at her home and following a two year battle with cancer. Diana was born in Rhode Island to Robert and Rita (Ostrofsky) Bahn on November 22nd 1957 and grew up in Connecticut and later in Colorado, where she graduated from high school and college. Diana was the beloved wife of Stan Freeman whom she married April 24th, 2003.  She was a 35 year resident of South Lake Tahoe and worked for many years at Harrahs Casino Resort, El Dorado County Mental Health Dept and for the past several years at Barton Memorial Hospital as a customer representative. At Barton Hospital she helped many of their clients in their time of need and was often specially requested by Barton’s clients because of her caring nature and passion to help. Diana’s loving, selfless heart was displayed through her love of her children and animals. She often took troubled children into her home and loved them as their mother, even while raising her own children. Occasionally meeting some of these children later in life who still referred to her as “Mom” and loved her dearly. Diana was an animal lover and had many pets throughout her life, including her dogs, Lacey, Dexter, Roscoe,Tina, Saoirse and Jack as well as her cats Pie, Otto and Isabel, most of whom were adopted. She loved them as part of her family. Diana was an excellent singer and had the voice of an angel. Her ability to sing harmonies was astounding and as a young woman she performed and sang publicly. She expressed her love for our Lord with her beautiful voice through her participation in the worship team of Lake Tahoe Christian Fellowship. Diana was an avid reader and also loved to paint and spend time gardening. During her illness it was a great source of joy for her to rise very early in the morning, sit on the deck, pray and watch the birds come to feed while reading, painting and singing. She loved to travel to Merida, Mexico with her husband, a city that she and her Mom fell in love with over thirty years ago, and spend time at her little home there. She loved the culture, the food and interacting with the Mexican and Mayan people and especially the children. Diana is survived by her husband Stan Freeman, sons Steven and Josh (Juliette) Villela, step-sons Conor and Emmet Freeman, grandchildren Aidan Villela and Belle Villela, her mother Rita Bahn, her sister Kathryn (Chris) Kelln, brothers Robert Bahn, Eric Bahn and Christian (Mary-Martha) Bahn, her sister-in-law Adrienne Freeman, brother-in-law John (Barbara) Freeman and her many nieces and nephews, all of whom she loved dearly. She was preceded in death by her father Robert Bahn. Family, friends and others whose lives Diana touched, are invited to a memorial service and celebration of her life at 11am on Saturday, September 23rd 2017 at Lake Tahoe Christian Fellowship, 3580 Blackwood Rd, South Lake Tahoe, CA.

Diana (Bahn) Freeman Diana Freeman, 59, of South Lake Tahoe, CA. went to be with the Lord on August 25th 2017, surrounded by her family at her home and following a two year battle with cancer. Diana was born in Rhode Island to Robert and... View Obituary & Service Information

The family of Diana Freeman created this Life Tributes page to make it easy to share your memories.

A comforting word from you means a lot.

Send flowers to the Freeman family.